What’s life like when you are forced to live in constant fear of water? Utarakan Jakarta / Speak up (North) Jakarta is a photographic account that shows the urgency to protect the city of Jakarta against impending floods. The team headed by Dutch documentary photographer Cynthia Boll describes the daily life of four people living in Indonesia’s capital city. Through stories of residents and a big social media campaign, the team brings land subsidence and climate change closer to the audience. Andrea Abellan of the European Journalism Centre talks to Cynthia about her project.

You explained that your interest in developing this story came after reading about the Giant Seawall, a construction designed to protect Jakarta against floods. Why was this project so inspiring for you?

Cynthia: ‘The central themes of my work are frequently linked to the influence of political and environmental factors on humans. When I first heard about the Giant Seawall on the news, I therefore quickly started to do research on the subject. I wanted to know more about what was really happening in Jakarta. I realised that the Giant Seawall is a highly complex project that can have social and environmental consequences that should not be taken lightly. Besides, as a Dutch citizen I know what it is like to live below sea level and deal with the constant threat of water.’

Your story is centred on the region of North Jakarta – Jakarta Utara in Indonesia. Why?

From the beginning I decided to focus on North Jakarta district, because it is the fastest sinking area – between 7.5 and 25 centimetres per year – and the most vulnerable flood zone in the city. This makes it a relevant place for my research. Furthermore, it is an area where many of the urban poor live. I thought it would be a good idea to create a platform for those directly at risk.’ 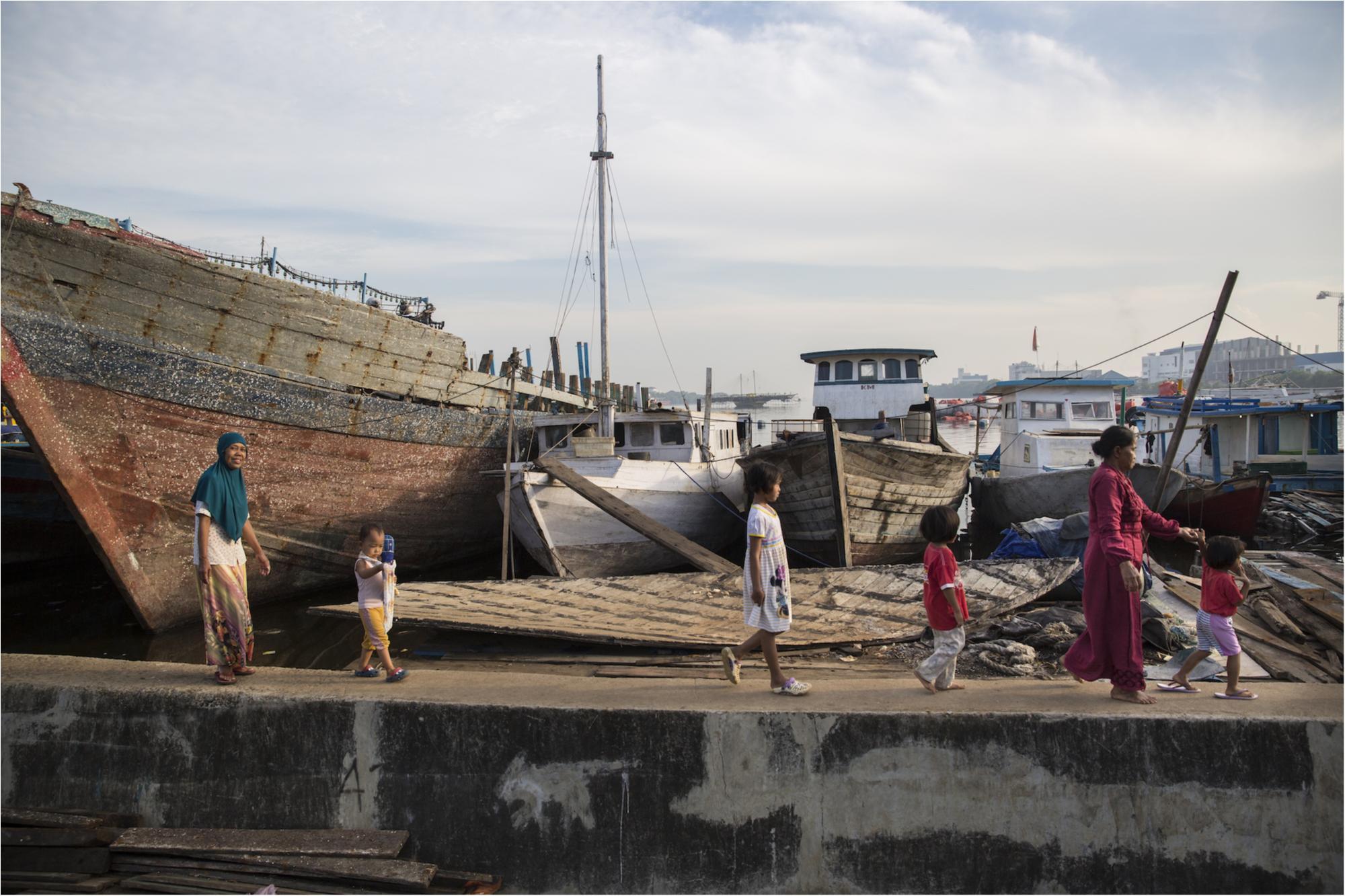 Utarakan Jakarta depicts the story of four people with different backgrounds but who nonetheless have something in common: their lives are affected by flood-related problems such as contaminated water sources and inadequate sanitation. How did you reach out to these people?

‘When I first travelled to the city I spent a lot of time just sitting in a square and walking around. As a photographer I always try to act as an observer without interfering too much. Little by little I started talking to community leaders and neighbours. I began to know the community better, I discovered what they loved and what worried them. In this way, I was able to find ‘the right’ people for my story.’

Can you further elaborate why you selected these four people as the core of your story?

‘The four of them represent different aspects of living with the constant thread of water. Through Alda, a young girl, I could describe the impact that water has on the youngest generations. Lukman, the fisherman, talks about the consequences of subsidence and the disadvantages of living in a house with a ground level that has to be raised every year. Sarmini, the street vender, shows the economic consequences of floods and constantly living in fear of eviction. Finally, Sumari, the tourist guide, personifies the relationship between past and present. Because of his profession he is able to explain the story of Kota Tua, Jakarta Old Town, properly.

When I first approached them, I started having friendly conversations on small issues such as family or work. Every time I visited them, I explained a bit more what I wanted to do. I ended up following them from November 2014 to August 2015. Over time we grew more familiar with one another and I knew exactly what I wanted to ask and tell about their personal experiences. We created a special bond. We spent a lot of time together and I have been able to document their lives during and after the height of flooding.’ 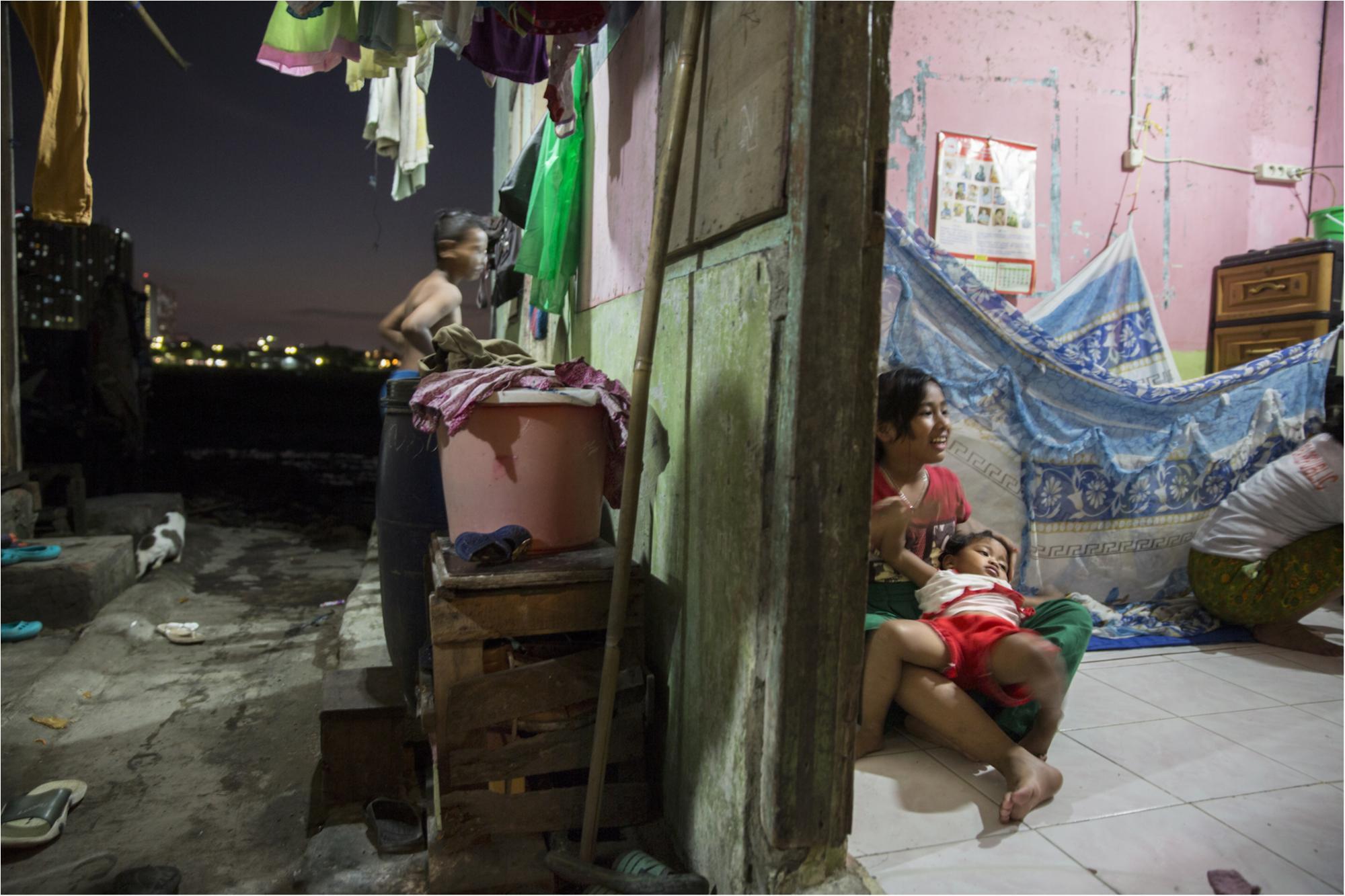 In Building Urban Resilience our grantees investigated how several African cities are trying to deal with the effects of water level changes due to climate change. How is Jakarta handling these concerns?

‘The problem of water in Jakarta is not only due to climate change, it is a combination of things. Jakarta is also sinking as the result of the unsustainable use of deep groundwater.

The biggest threat for the city is the water coming from the sea. At this moment, the city relies on an existing 40-year-old seawall that it is supposed to keep it safe from the Java Sea. However, this seawall is also sinking at an alarming rate and it can no longer protect the city. Its height was raised in 2008, but as the structure slips under the waves, it offers little protection against another big storm surges, or even a moderately high spring tide.

Additionally, climate change is causing both sea levels to rise and more intense rainfall. This is translated into more water flowing through the city and more severe floods.’

Researchers are now able to predict next naturals disasters using the cycle of the moon as a reference. Apparently extreme floods will hit Jakarta again in 2025. Can you imagine a more resilient city by that time?

‘It seems that the “worst” meteorological circumstances can coincide again by that time. In this case, an extreme tidal flood tide can occur and it could be comparable to the terrible disaster in 2007. This means that we have ten years to prepare.

Since 2012, a Dutch team of water experts and engineers have been working closely with the Indonesian government trying to make the city more resilient to flooding. As I mentioned earlier, they are planning to build a Giant Seawall, an ambitious mega project that ultimately leads to the construction of a 36-kilometre-long dike in the bay of Jakarta. However, it is still uncertain which diverse impacts on communities and financial models this master plan can have. For instance, to carry this construction, more land can be reclaimed and as a result more people can be evicted.

There is a huge debate. The government is divided, some members agree with the development of this Giant Seawall, whilst others oppose to it. For the time being, little action has been taken to protect the city from the floods and to stop the sinking.’ 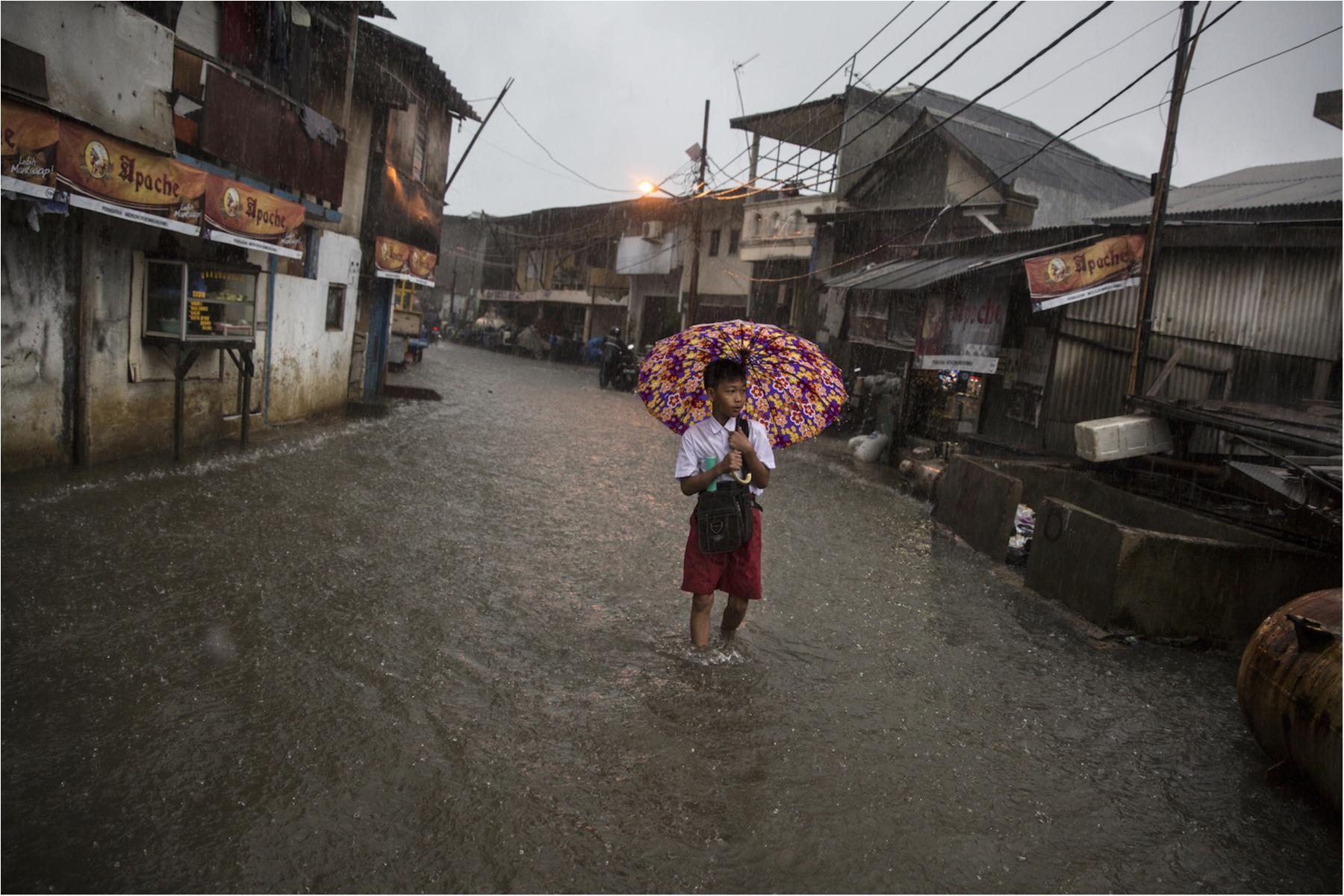 You decided to present this project as a 12-week-long Facebook campaign. Why did you choose this form to show your results?

‘The target audience is local people from 18 to 35 years. I chose to focus on this group because this will be the generation working when the city will be flooded in 20 or 30 years, if predictions come true. In that case, they will be the ones most directly affected. On the one hand, I observed that people of these ages neither read many newspapers nor watch TV. On the other hand, they are really attached to their smartphones. Facebook is really popular in Indonesia, everyone has at least 2.000 friends. We thought that if a part of our audience shared our links, we would receive a lot of attention.

We created two different Facebook pages: Utarakan Jakarta, which is fully written in Indonesian, and the English page People Behind the Seawall. I hope that the Facebook community will keep growing and will turn into something bigger so people will eventually become more conscious of the urge to find solutions to stop the sinking. The project can also be followed through our Website, Youtube and Twitter accounts.’

How is the audience reacting to this way of engaging them?

‘We have now been working on the Facebook platform since 1 October. You probably need more time and more budget to create a stronger social media campaign. However, we give more importance to the engagement of the users rather than to the amount of them. In this sense we are pretty satisfied, there are many followers asking how can they contribute. Every Friday, we have a weekly changing guest representing the people of Jakarta. The content they post can vary from special poems to draws and illustrations. Followers are very willing to collaborate.’

You have a wide experience as a photojournalist. What is the role of photography in Utarakan Jakarta?

‘I started documenting the main characters’ lives in photos and then came the texts to support them. We chose a couple of topics for each character by selecting the pictures that best rhymed with their concerns – from family and friendship to pollution. The pictures and the visuals have always led the project.’ 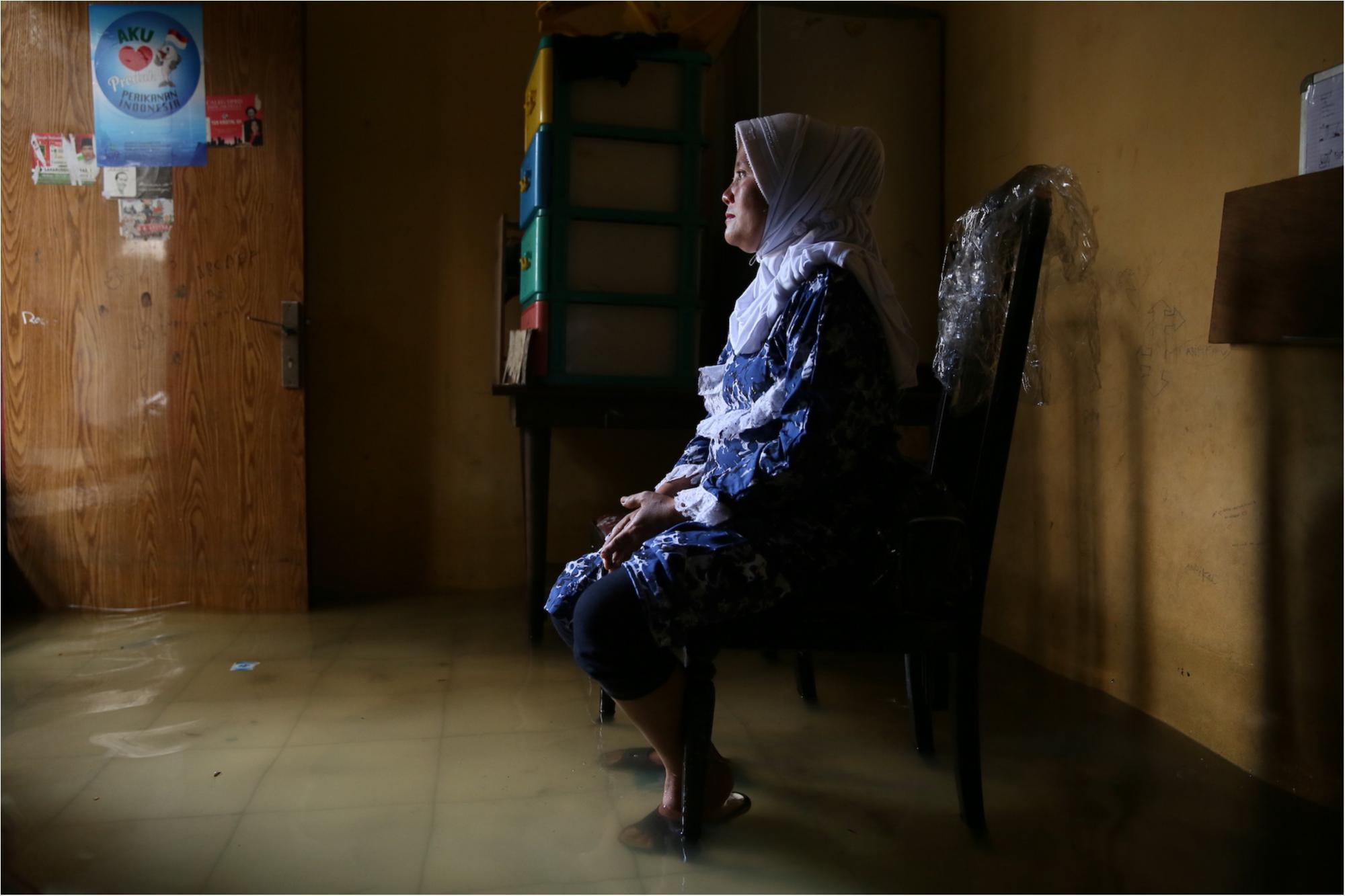 There is a big team behind this project comprised of professionals coming from different fields. How have you experienced the team work?

‘Our team consists of a project coordinator, a web developer, a graphic designer, one journalist, a copywriter, a video editor and a social media expert. They are all young urban Jakartans, so they are part of the target group. I felt that it did not make sense to make a project for that specific group without including them in the execution. Usually journalists go to a country to build the story and bring it back to their own country. I really want to do things differently. I wanted to leave something for the people there that could help them. I threw a rock in a river to cause a ripple effect.

The experience to start recruiting the right team members and establish a good working relationship has been interesting and challenging at the same time. Now we are working from a distance, communication is sometimes problematic. The Internet connection is often patchy and language can cause misunderstandings. Sometimes cultural differences can also be challenging.’

Many companies and organisations such as Canon and the World Bank have supported this project. How did you call their attention to collaborate on it?

‘Through a lot of research and many meetings. They were all very excited about the idea, so they offered their network, expertise, and moral support. I was really persistent, this is an attitude I would advice to new grantees, be persistent – without getting annoying. Most of the time media or organisations do not respond to your emails but you have to keep trying, even if you do not receive an answer after having sent more than six messages. It pays off.’ 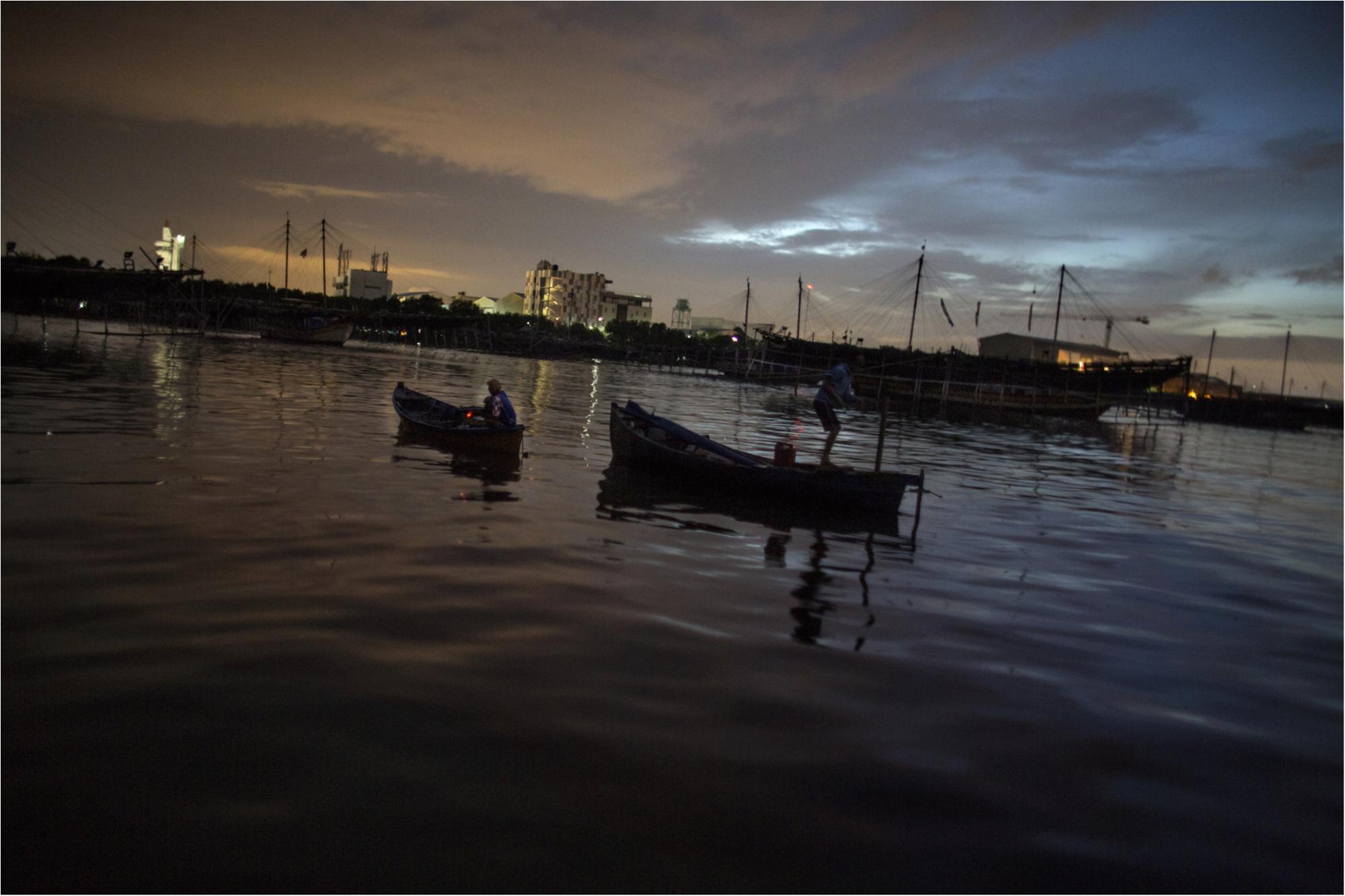 Utarakan Jakarta has already been published by the Dutch printed edition of National Geographic. How is this version different from the online platform?

‘The difference is that, in the print edition, the project is presented as a one-off article, whilst the online edition allows readers to follow up on the story. The tone of the text is different, too. On social media channels we adapted the language of the target group. It is written in a lighter way, without using complicated words. We want to make the story as understandable as possible so people can relate to it. For example, you can talk about floods by telling how glad a mom is because she could give birth to her safe baby after a flood.’

What is next for Utarakan Jakarta?

‘In February, during the height of the rainy season there will be an outdoor exhibition held in Jakarta. Of course, we will continue to raise awareness on flooding and look for possible solutions.

The online campaign provides a great setup for the project to continue; rising water levels do not only pose a threat to the people of North Jakarta, it affects everybody in the city. We are exploring possible options to continue with the project in other areas. We would like to build a stronger social media presence and to attract more followers. In addition, it would be great to have the project published again outside of Indonesia. This would definitely help in educating people outside the country about its situation.’

Andrea Abellán is an intern at the EJC headquarters in Maastricht. She studied journalism in Spain and Italy and has extensive working experience abroad. She is now finishing her Master in New Media and Digital Culture at Utrecht University.